Visio is a vector graphics and diagramming app made by Shapewear Corporation. The program became part of the Office apps once Microsoft acquired it in 2000. Visio runs on Microsoft Windows and has a trialware type of license.

Windows is the only operating system that's compatible with Microsoft Visio. The system requirements for running this program depend on the version you're using. Earlier Visio versions require less powerful specs when compared to the recent ones.

Visio makes it intuitive and easy to create diagrams, flowcharts, and organization charts. The program can't let you create engineering designs and floor plans. You can even use modern templates and shapes to your advantage.

The flowcharts on Visio allow team members to work better together. It's possible to include stakeholders' insights into the flowchart. Visio offered as part of Office 365 allows real-time collaboration.

Visio 1.0 was the first-ever program released by Shapewear Corporation. When Microsoft acquired the program, the company branded it as an Office app. Just like Microsoft Project, Visio isn’t part of the Office suites.

Ribbons first appeared in Visio 2010 to offer increased access to toolbars. The ribbons are available on Visio 2010 and its successors. The 2007 versions of Word, Outlook, Access, PowerPoint, and Excel already had this feature.

Visio can facilitate functions that include analyzing processes, standardizing processes, and identifying redundancies. Visio helps identify errors and the steps to improve them. You can use Visio programs in software engineering, business analysis, or chemical engineering.

How Does Each Version of Microsoft Visio Stand Out from the Rest?

Microsoft used the same formula used when creating new versions of Office apps. The formula involves improving tools and features for a greater user experience. So what makes each version of Microsoft Visio different from others?

Visio 2010 makes it easy to create diagrams from remote places and edit diagrams as a team. You can run Visio Online on your browser to make use of these improvements. Viewing, editing, and collaborating on diagrams is possible if you’re using Microsoft Teams.

Microsoft announced that it would retire Visio 2010 in 2020. The company uses this tactic to persuade users to upgrade to the latest version. Users have the option to subscribe to Office 365 to access Visio with improved features.

Version 2007 didn't allow users to visualize data from Excel spreadsheets. Its successor lets you convert process map data in spreadsheets to diagrams. The data may come from various external sources.

Visio 2013 makes it faster to create professional diagrams. The program comes with improved versatile shapes and templates. Users can derive a fluent drawing experience from it when working on diagrams such as floor plans.

Features such as space, Auto-align, and Auto Size are part of the drawing canvas in Visio 2013. The program makes it easy to import DWG files and customize shapes. You'll also find better containers for classifying shapes and subprocesses for complex processes.

Based on its features, Visio 2016 is a great improvement of Visio 2013. The app offers access to several shapes and themes for excellent drawing experiences. Visio 2016 Shapes are easy to insert and delete and change while preserving your diagram layout.

Engineers can find the refreshed templates for floor plans and maps useful. Features such as easy shape customization, DWG file support, and improved containers are useful too. You can still use process standards and business rules for validating diagrams.

You’ll retain all the features you had while using Visio 2016 if you’re upgrading to Visio 2019. Microsoft Visio 2019 comes with better starter diagrams to get you moving. There’s an organization chart on the program together with templates you can use. 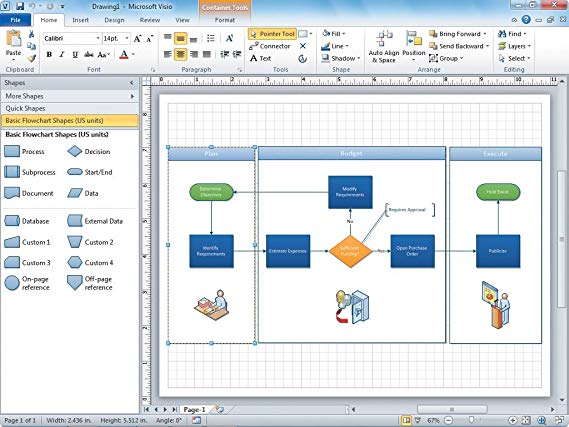 Microsoft Visio targets enterprise users working at the corporate level. Each Visio version comes coupled with features users would enjoy working with and exploring. Visio 2019 may appear superior to its predecessors due to its improved features.

As you decide to upgrade to a new Visio version or not, consider the features you need. Your reputation in your line of work may depend on the Visio program you choose. You should aim to create a more professional diagram using Microsoft Visio.

If you’re looking for a software company you can trust for its integrity and honest business practices, look no further than SoftwareKeep. We are a Microsoft Certified Partner and a BBB Accredited Business that cares about bringing our customers a reliable, satisfying experience on the software products they need.   We will be with you before, during, and after all the sales.